The first man to wear a sanitary napkin

Arunachalam Muruganantham is a man on a very unusual mission.

He wants to change the way that poor women in developing countries cope with their monthly periods. And in the heat of this obsessive quest, the 49-year-old Indian entrepreneur did something extraordinary to test the sanitary towels he invented. “Neil Armstrong was the first man on the moon,” he tells me, his words tripping together with enthusiasm. “Hillary and Tenzing were the first to conquer Everest and I, Murugan, became the first man in the world to wear a sanitary pad.” He tells me he took this step because no female would do the test; in the conservative circles of Indian society, women won’t even discuss menstruation let alone get involved in trying out new sanitary pads. “Even wives are not ready to talk to a husband about menstruation,” he says regretfully. Birth of an idea Twelve years ago, soon after his wedding in rural southern India, he spotted his wife hiding some ‘ugly unhygienic rags’ in the house and was shocked to realise she was using them for her period. When pressed, she explained that if she bought a pack of sanitary towels, she couldn’t afford to buy milk for the family. Mr Muruganantham decided to invent an affordable solution for his wife and women like her. After four years of initial research he made a small machine, designed to be used locally by several women to produce batches of simple pads cheaply. And that is when he carried out his own research, staging his own ‘period’. “I made an artificial uterus,” he says proudly. He took the rubber lining from inside a football and filled it with animal blood. He made a small cut in it, with “a tube connection to my panties containing the sanitary pad”.

I am going to make India, my country, a place where 100% of women use sanitary napkins”

And then, while wearing this contraption, he took exercise, walking and cycling, to test the product in various conditions.

This kind of thing did nothing to endear him to neighbours in his village. Long-term vision But his persistence has paid off. He tells me he has sold the hand-operated machines which make the sanitary pads across 23 of India’s states, and in Nepal, Bangladesh, Afghanistan, South Africa and Zimbabwe. Each machine can be worked by four to six women and costs $1,000. The pads are made and sold locally, and the final price-tag is a quarter of the cost of a factory-made and packaged product. Mr Muruganantham’s ambition is gargantuan. Right now, he tells me, only 2% of women in India’s countryside use sanitary towels; the vast majority use unhygienic rags to deal with their periods. The Indian health authorities believe that increases the risk of reproductive tract infections which put women’s health in danger. 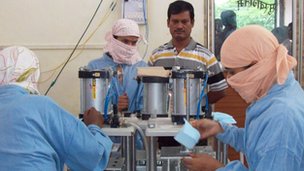 “I am going to make India, my country, a place where 100% of women use sanitary napkins.” He suggests that might create no fewer than a million new jobs. The vision is not just about hygiene – it is about fostering employment. I ask him if he is trying to make profits out of his invention. “I am making something,” he admits coyly. But he denies operating like a large corporate venture and indicates he is making enough “just to sustain” the business. And now it turns out he is harbouring plans for new products, including nappies (diapers) for babies and incontinence pads for elderly people. His low-tech, local approach is undoubtedly a million miles away from the operations of the large consumer goods companies that mass-produce sanitary pads and tampons. “We compete very comfortably with the big giants,” he says, and laughs: “That’s why they call me a corporate bomber.” This sort of innovation done by rural women came as a shock to the large companies. “The model of mass production is outdated,” he says gleefully. “Now it’s about production by the mass of people.”     ———– SOURCE: BBC News