It is a far cry from sun-kissed, body-conscious California, where Mrs Kumar enjoyed clubbing with friends, hitting the gym and shopping with daughter Lucy.  But despite the radical lifestyle change, she insists she is happier than ever. The former receptionist at an acupuncture centre said: ‘I love my life here with Mukesh – I wouldn’t exchange it for anything in the world.’

In love: Adriana Peral, 41, and her husband Mukesh Kumar, 25, met and fell in love online Mrs Kumar – who admits she had plenty of relationships back in the U.S., but had never found true love – began talking with Mukesh, sixteen years her junior, on the social networking site in February. Over the next few months the pair grew closer, until one evening Mukesh unexpectedly called.She explained: ‘Mukesh declared his love to me right there and then on the phone. I didn’t know how to react, and at first just laughed it off.’But after we talked some more, I realised he was serious and so I said if you win my heart, I will consider marrying you. We spoke for around three more weeks and it was during that time I decided I wanted to move to India to be with him.’

Leaving behind her 25-year-old daughter Lucy Cortez was a heart-wrenching moment, with many friends and family fearing for her safety in India. Mrs Kumar, whose parents moved to the U.S. from Mexico, said: ‘When I walked in and told everyone I had decided to leave and move to India, they were in complete shock. ‘My daughter was crying, she was in floods of tears. She was worried something bad would happen to me. ‘She said India was unsafe for women. I had to turn to her and reassure her everything would be alright. ‘Some people thought Mukesh was a fake, an online scam and that he didn’t really exist. I can’t describe the moment I finally saw him at the arrivals gate at Indira Gandhi airport – it was a big relief to finally see him in person.’ But she admits nothing had prepared her for the culture shock she was about to experience. Her new home was a modest farm house in Popran, a large village over 30 minutes drive from the nearest town. Mrs Kumar found the family used cow pat cakes, made by drying out the excrement of the families herd, as fuel. And with no inside toilet, a bucket for a shower and cows roaming around the communal area, the lack of amenities was tough to adapt to. She added: ‘When I first stepped off the plane it was a complete culture shock. ‘It is stricter here – women have to cover up more. ‘In Haryana many people live off the land, there are few basic amenities. We cook on a stove which is outside, and my living room doubles as the place where we store the cows at night. ‘We sometimes use the bull and cart to ride around, and the toilet is a communal one. The shower is just a bucket in a closet sized room with a hole in the floor. ‘If people back home could see where I am living they would think I am crazy.‘At first it was a real struggle, but soon you realise you don’t need a fancy toilet or power shower to be happy.’One of the biggest challenges, says Adriana, was being accepted among the largely impoverished locals.Mrs Kumar, who immediately ditched her favoured high heels and adopted sandals, saree and headdress, said: ‘Foreigners are rarely seen in the villages here, and wherever I went a crowd would develop all wanting to catch a glimpse of this outsider.’Over time I began to get used to it. It was a bit like being a celebrity, but they have accepted me as one of their own now.’A big part of that was dressing like they do and trying to speak some Hindi. In the U.S. I loved wearing high heels and dressing up for a night out at a club with my friends, but here things are more low key.’You can’t get any of the make-up I’m used to using and women generally don’t apply much of it anyway, it is an unnecessary cost.’The locals respond when you try and fit in and live as they live.’In November 2013 Mukesh and Adriana tied the knot in a traditional Hindu ceremony, which made headlines in India’s national Hindi language media.The event was a major occasion within the conservative community too – where women are still often expected to be doting housewives upon marriage and normally wed within their own religion and caste.Mukesh, who speaks broken English, but is learning from his new wife, said: ‘Adriana is a good wife. ‘She is always doing housework and if my mum is doing dishes she say, “No, I want to do – it is my job”.’I am very happy to marry with her. It is true love.’Crucially for Mrs Kumar, her mother-in-law Bimla Devi, 70, has given the pair her blessings – and even endorsed her housewife skills.Speaking in Hindi, Bimla said: ‘I am happy my son married a foreigner. She respects me. If he had married a girl from our village, she would probably not have respected me as much as Adriana does.’She works all the house too, I like her a lot.’The couple now plan to have children together and build a family in India, but Adriana isn’t ruling out returning to the US one day. 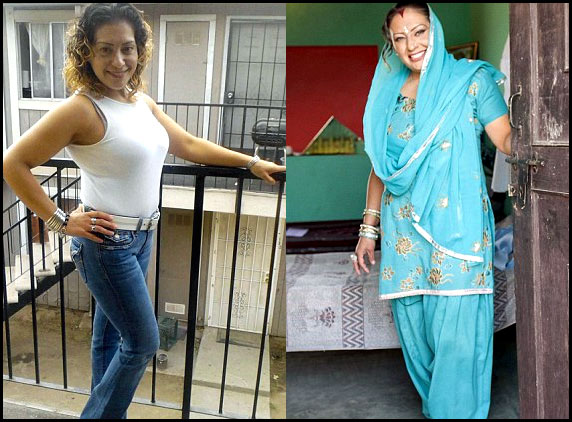 She said: ‘I am actually planning to have children with Mukesh and my mother-in-law even wants me to have two.’I get on really well with all the family, Mukesh’s brothers and sisters, his uncles – they have all taken me to their hearts.’If I could bring the American food and luxuries here it would be perfect. But one day we would like to return to America with our family.’The people of India are very loving and this does feel like a second home now.’