Gender Pay Gap: I Deserve More Coins And Not Your Conclusive Frowns!

The European Commission defines the gender pay gap as the average difference between men’s and women’s aggregate hourly earnings;  in Australia, the gender pay gap is calculated on the average weekly ordinary time earnings for full-time employees excluding  part-time, casual earnings and overtime payments as published by the Australian Bureau of Statistics, whereas the gender pay gap in the United States is the ratio of female to male median yearly earnings among full-time, year-round (FTYR) workers and the statistic does not take into account differences in experience, skill, occupation, education or hours worked, as long as it qualifies as full-time work. 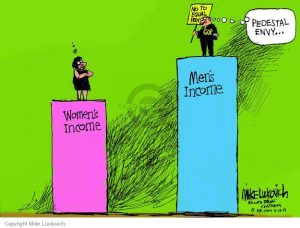 In the UK, the aggregate gender pay gap has continued to close and as of 2012, the gap officially dropped below 10% for full-time workers whereas Australia has a persistent gender pay gap, between 1990 and 2009, the gender pay gap remained within a narrow range of between 15 and 17%.  In August 2010, the Australian gender pay gap was 16.9%. In 2013 the median weekly income of full-time workers in the United States was $860 for men, compared to $706 for women. The female-to-male earnings ratio was 0.82, slightly higher than the 2010 ratio. Well, we all have probably heard that men are paid more than women over their lifetimes in our country too. But what does that mean and what leads to this gap? Are women paid less because they choose lower-paying jobs? Is it because more women work part time than men do? Is it because women are supposed to have more care-giving responsibilities than men have? Or is it because women have learnt to settle down for anything and everything less in all these years? Gender pay gap in India refers to the difference in earnings between women and men in the paid employment and labour market. For the year 2013, the gender pay gap in India was estimated to be 24.81%. A report by the World Economic Forum highlights that in the corporate sector in India, a woman is paid only one-third of what a man in the same position is paid. Further, while analyzing the level of female participation in the economy, this report slots India as one of the bottom 10 countries on its list. Thus, in addition to unequal pay, there is also unequal representation, because while women constitute almost half the Indian population (about 48% of the total), their representation in the work force amounts to only about one-fourth of the total. There are many facets of gender inequality, and in the current scenario, it is “professional inequality” that incessantly acts as a barrier for women’s advancement at the workplace. Professional inequality, as explained by Indian Economist Amartya Sen in one of his lectures, refers to discrimination in terms of employment, remuneration, promotion at work and even occupation (Sen, 2001). Some Interesting Facts: 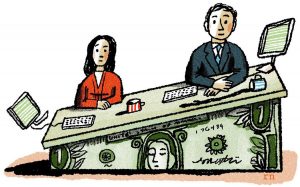 The table below depicts The Gender Pay Gap across Indian States (Only those states are considered for this analysis which has sufficient number of female observations).

IMPACT: Research suggests that when countries are able to raise the female labour participation rate, this stands to benefit the entire economy. Apart from potential GDP (Gross Domestic Product) growth, equal employment opportunities for women could also result in increased growth and profitability in the private sector. It is also important to note that women in India perform 9.8 times the amount of labour in the unpaid sector either through household duties or care work. If this work was measured and valued, it was estimated by McKinsey that it would contribute 0.3 trillion dollars to India’s total economic output. THERE IS NO SILVER BULLET TO KILL THIS AEONS OLD GENDER WAGE GAP; ALL WE NEED IS TO DEVELOP THE RESPECT TOWARDS EACH OTHER’S SKILLS AND KNOWLEDGE IRRESPECTIVE OF SEX…BUT BEFORE ALL THAT ARE WE READY TO FIGHT AGAINST IT AND HELP TO BOOST UP THE COUNTRY ECONOMY AND NOT ONE’S FALSE EGO?  ARE WE REALLY READY FOR IT?     ———— ABOUT THE AUTHOR: This article is written by Payel Sarkar, our intern.